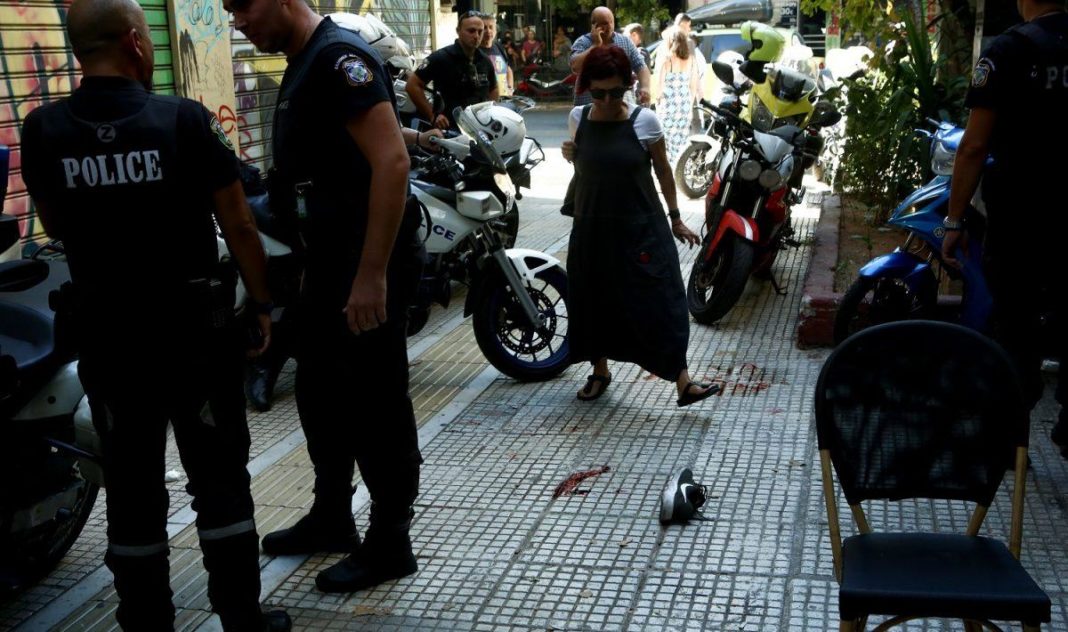 Immediately after the murder, while the news bulletins were broadcasting the headline “a would-be robber injured himself while trying to escape,” the owner of the jewellery store made statements on at least two television channels. Avoiding any reference to the lynching, he stated that “the perpetrator broke the outside window, came out from below and cut himself [on the shards of glass]. He collapsed on the spot and died”. Even after video material of the events was released, and having already given his statement to the investigator, he claimed on television that “when you see someone entering your shop, you go crazy.”

In his statement to the investigating magistrate as published in the media, he testified that he saw Kostopoulos looking for money, that he was hitting the cash register and that he broke the inner and outer shop windows on his own in an attempt to break free. The jewellery shop owner further claimed that that he did not hit Kostopoulos and that he does not know where so much blood came from, inside and outside the shop.

Meanwhile, the second defendant, both on the day of the murder and in the following days when the prosecuting authorities were looking for him, was stating on social media that he had been an eyewitness to the incident. He did not mention his involvement, and although it was publicly known that the authorities were looking for the second man who appeared in the video, he went on claiming that Zak Kostopoulos was in a state of shock, that he was high on drugs and that he had slashed his own neck with a shard of glass. Even once the state security branch of the police found him, he phoned in to a TV show and claimed that “the perpetrator was in a state of aggressive shock… He had put some jewels in a bag, he had opened the cash register, he had thrown it to the floor. He was holding a knife as he tried to get out. At that point, I noticed the knife from my vantage point, and I thought to myself, exercising my best judgement, that this man, in the state that he is – there is no way he will not go out to kill people. That was my reaction, to confine him to this space. After he managed to break out, I disarmed him, and now we have these developments.”

In his statement to the investigating magistrate as published in the media, he claimed, among other things: “I hit a section of the shop window so that the glass would fall and not cut the perpetrator’s neck while he was coming out, I hit it to protect him.”

The claims of the prosecution

As reported by lawyers for the prosecution, to date there has been no indication or explanation, based on investigations by the police or the judicial authorities, as to why Zak Kostopoulos entered the jewellery store. The only thing that is certain is that he was not high on drugs or alcohol; this has been established by toxicological tests conducted during the autopsy.

There may have been other circumstances leading to a re-evaluation of the crime such as, for example, racist motives. However, although the Supreme Court prosecutor ordered an investigation into possible racist motives for this crime, nothing was done in this direction and the police authorities did not take action to provide any evidence that could be evaluated in order to confirm or deny anything of the sort. In this regard, the lawyers for the prosecution emphasize that “in any case, it is obvious from the behaviour of the perpetrators, the first aid responder and the police, regardless of whether or not they had realized that he [Kostopoulos] was gay, that this crime is racist in the social sense, meaning, they considered him to be a marginalised person, and therefore we can handle him in this way, both in failing to assist him and in arresting him.”

After the defendants claimed that they had acted in self-defence, the lawyers pointed out that:

“The strange thing about this case is that, even if we assume that they actually thought that Kostopoulos was trying to commit a crime in the jewellery store, even if we really believe that this was their motive, this man was trapped in the shop. So it would’ve been enough to call the police, who actually turned up after a few minutes, and arrest him or investigate what happened. The fact that they, themselves, with their own actions, broke both windows (which is proven by the video recordings) in order to target him and then to beat him to a pulp – this is an act of aggression. They actually released the man they were supposed to be afraid of. This means that they had no fear. This was a conscious decision, it was meant to be an exemplary punishment.”

In this lynching case, we were shown how the police investigated the robbery. They treated the already-dead Zak Kostopoulos as a suspect and his telephone logs were examined, but not those of the two men who stand accused of killing him.

According to the lawyers for the prosecution, “During the so-called investigation into the incidents, the police persistently continued to treat Zacharias Kostopoulos as a would-be robber armed with a knife, sought to investigate a crime that never happened, and turned a blind eye – even ignored – a crime that was committed. Even the police themselves did not verify the facts. First, robbery does not legally exist, because robbery is an act of violence against a specific person, which did not happen, and second, no attempted theft can be substantiated, because, as the police officer himself testified, nothing had been taken. Also, Zak Kostopoulos entered through an open door and nothing was found in his possession.”

Four of the eight police officers present at the scene are also jointly charged with the crime of fatal bodily harm. The Secretary-General of the Special Guards Association described their actions as “legal police violence”, while the President of the Union of Police Officers, commenting on the brutal handcuffing of a half-dead, bleeding man, said that “this is standard practice, whether you like it or not”. The Sworn Administrative Enquiry carried out by the Hellenic Police proposed the dishonourable discharge of the four police officers, while the remaining four would be suspended and laid off.

Previous article
The Facts
Next article
Defendants and Charges